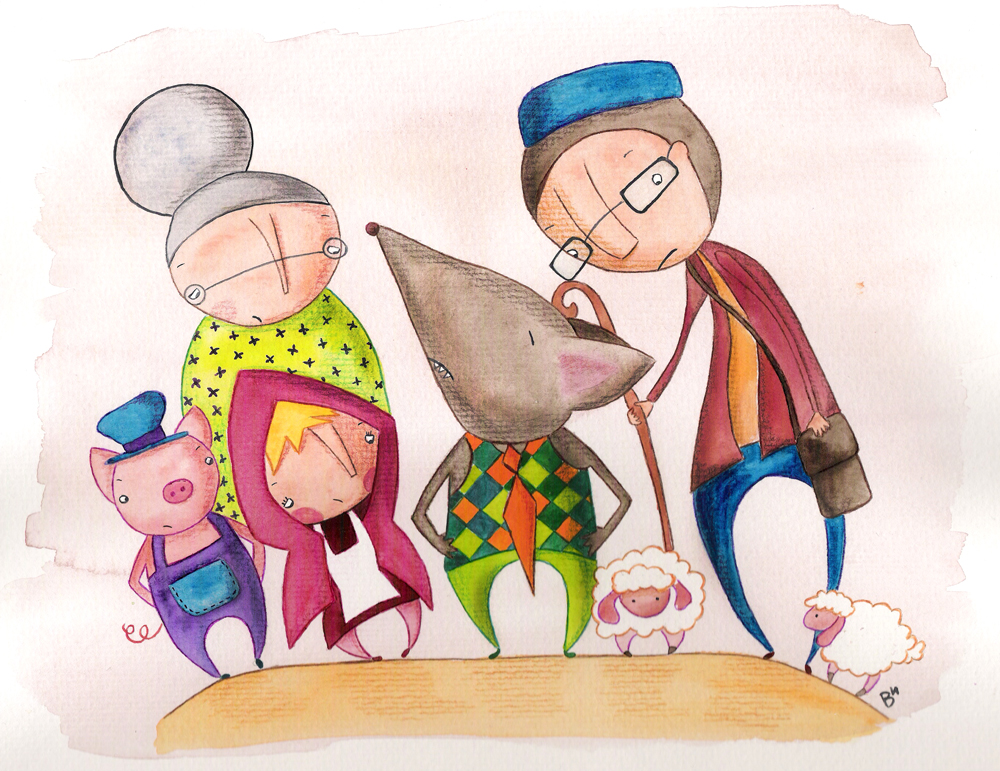 Cuento en inglés: The villain of the story

Tired of always being the villain of the story, Mr. Wolf got up one morning ready to give up his job. He put on his best suit, had a good shave and went off to the employment office for children stories’ characters. At the office there was a great fuss going on.

that she had turned him into a mouse:

– Such disrespect for your elders! -She shouted angrily.

The office staff took more than half an hour to convince the witch to turn Puss in Boots back to normal, so that is why there was so much delay that morning. When they finally shouted out his name,
the wolf, dragging his feet, sat down at the office worker’s desk.

– How can I help you, Mr. Wolf? Have you had any delays with your salary this month?

– No, no problem at all with that. The trouble is with the job itself. I am tired of being the villain of the stories; of the children being afraid of me; of all the other story characters laughing at me when I end up burnt, with my stomach full of stones or shot by the hunter. Either you turn me into hero or I quit my job!

– But we can’t do that! For heroes, we’ve already got loads of Princes!

– But that is also very boring. Haven’t you heard the princesses’ complaints? They are fed up with having to be the dainty ones always in need of being saved. Times are changing, sir. You should all know this once and for all!

But however much Mr. Wolf tried to convince the officer he got nowhere, so he left the office angrily ready to never, ever work again.

And this was how the stories ended without a villain. The Three Little Piglets stared with nostalgia at their new brick house with a chimney. Little Red Ridding Hood was dissapointed with her granmother because she didn’t have either big eyes, or a big nose or mouth. The Seven Little Goats waited bored out of their minds for their mother to come back home. Peter did not scare anyone when he shouted «Here comes the Wolf!»… Because they all knew that Mr. Wolf had gone forever.

But the worse thing was that, without Mr. Wolf, the stories stopped being funny and the children were getting so bored that they stopped reading.

At the employment office of children’s stories, all the characters were so worried that they decided to have a meeting to try to find a solution.

– If children stop reading, we will soon all disappear!

– We need to convince Mr. Wolf to return to his job as the villain of the stories.

– We have to promise him that we will not laugh at him again. We need him!

So they all went together to visit him. When Mr. Wolf saw that all the characters wanted him to return, he was very touched.

– Ok -said Mr. Wolf-, I see that I have no choice but to accept my role as the villain of the stories. But to return to children’s literature I need a favour from all of you: I want all the children to know that in my free time I do not go around eating grandmothers, or little goats, or piglets.

– I know about a blog on children’s literature that I’m sure they would be interested in this story!- exclaimed the rabbit without ears enthusiastically.

And this is how the story of why Mr. Wolf didn’t want to be the villan of the story came to us…

1 comentario en «Cuento en inglés: «The villain of the story»»