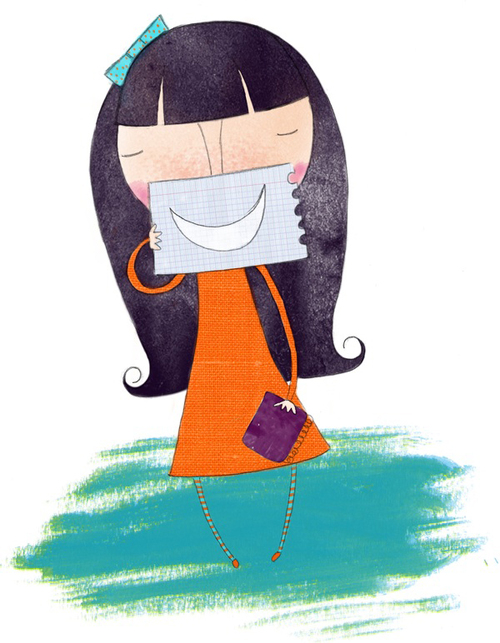 The girl who didn’t know how to laugh

There are always things that, no matter how hard you try, you are unable to do. Julito, Leonor’s son, didn’t know how to wink; he tried to do it but always closed both eyes at the same time. Sonia, Santi’s older sister, couldn’t stand on her head. You can’t imagine how many times she hurt herself trying to copy her friends! Malena, the local grocer, couldn’t pronounce the letter “r”, and Matías, Jaime’s grandfather, didn’t know how to finish his sentences.

But nobody seems to mind any of this. To not wink, not be able to stand on our head, not pronounce the letter “r” or get into a mess with never ending sentences, were all things you could live with. However, the thing that Tina couldn’t do really worried her parents, because Tina didn’t know how to laugh.

She had been to see psychologists, doctors, child specialists and even faith healers but no one could say why she was unable to laugh. Her mother was so worried:

– But Tina, my dear, is it because you are unhappy?

But happiness had nothing to do with the problem. Tina wasn’t sad, nor did she feel hard-done-by, she simply didn’t know how to laugh. Even though there were lots of things around her that she found funny:

To watch poor Julito trying to wink mischievously. To stand on her head next to Sonia and see how she always ended up falling when she tried to imitate her. To hear Malena say “Would you like some raspberries some radishes and a kilo of rhubarb?” To try to follow the silly conversations of grandfather Matías.

She thought it was all very funny but as she didn’t laugh everyone thought she was boring, that she didn’t like anything and she wasn’t happy. And that made her sad….

Then, one day, she met Miki. The same as Julito, Malena, Sonia, Matías and herself, he also didn’t know how to do something. He couldn’t speak using his voice, but he could with his hands. As nobody understood him he carried around a notebook to write down what he wanted to say:

– Why don’t you draw your smiles, the same as I have to do and show it every time you think something is funny? – He wrote in his notebook.

Tina thought it was a great idea. She ran home and collected all the coloured pens she could find. She drew a nervous smile, a loud laugh, a nice smile. She drew an outright roar and so on until she had twelve pictures that described each type of smile Tina felt but could not express.

That same afternoon she went out looking for Julito and when she told him he was so excited about the idea that he tried to wink. Watching him making all those faces, Tina showed him one of her drawings of a friendly smile.

Later on she met grandfather Matías and together they laughed with the drawing of a contagious laugh.

Malena, however, didn’t like the cheeky smile that Tina showed her and Sonia got angry when she was shown the killing-yourself-laughing laugh.

– I’m afraid that sometimes you have to hold back your laugh – thought Tina to herself.

But to laugh inside was not a problem for Tina; she’d been doing it for years.